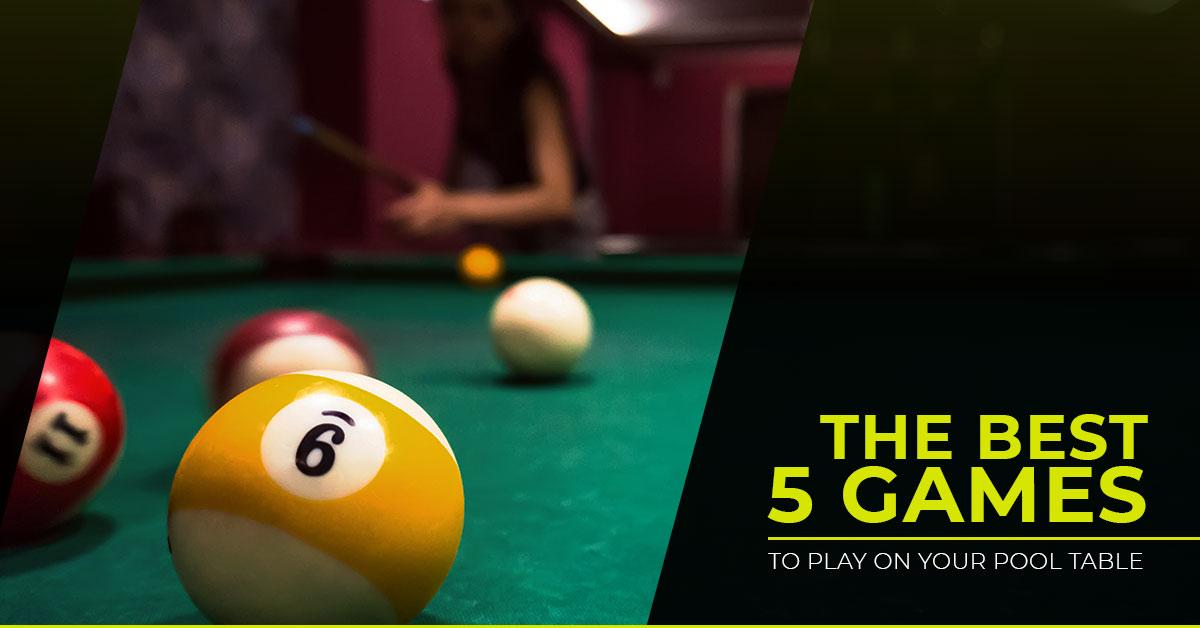 Most people are familiar with the rules of Classic 8-Ball Pool. It’s the most commonly played pool game in America. However, sometimes it can be fun to introduce some new types of pool games to your pool table. This is especially true when you have more than two people who would like to play at the same time. In this post we will explore the five best games you can try on your table the next time you want to shoot some pool.

This is the classic pool that most people are familiar with. You set up all 15 object balls on the foot spot and two players take turns trying to hit in either solids or stripes (excluding the 8-ball). Once a player sinks all seven of their balls in the pockets, they can attempt a shot at the 8-ball. This shot must be called and if the cue ball is scratched, or if the 8-ball goes into a pocket other than what was called, the player shooting automatically incurs a loss of game.

The rules of 9-Ball Pool are quite simple. After racking only the object balls 1-9, the purpose of the game is to try to sink the 9-ball into any pocket. The catch is that whoever is shooting must hit the lowest ball on the pool table before any other. This means that if the 1-ball is on the table, the cue ball must hit the 1-ball before any other ball or the shot is considered a foul and the next player may take the next shot from anywhere on the table. If the 1-ball has been pocketed, then the 2-ball, or whatever the lowest remaining ball on the pool table is, must be the first ball struck by the cue ball.

Cutthroat is a favorite for groups of three or six players. In a game of cutthroat, all 15 object balls are racked and placed on the foot spot and then each player, or pair of players, will be assigned a group of five object balls (1-5, 6-10, or 11-15). These groups can either be assigned before the game begins, or you can set the rule that a player can claim a group once they have sunk a ball. The object of the game is then to be the last player to have balls from their group remaining on the pool table.

For example, Player 1 breaks, and in his break he sinks the 3-ball. He then claims the middle group (6-10). He hits again and misses. Player 2 shoots and sinks the 10 ball. Since one ball is missing from both the low group (1-5), and the middle group (5-10), she chooses the high group (11-15). Since there is only one group left, Player 3 is automatically assigned the low group (1-5). Once all the balls in a group are sunk, that player is eliminated from the game and the remaining players continue until there is only balls from one group left on the table.

While Cutthroat makes for a fun game for a group of more beginner players, One Pocket is an excellent game to play for more advanced players. The rules are quite simple. After setting up all 15 object balls in a traditional rack, each player is assigned a foot corner pocket typically by a coin flip and for the rest of the game, that is the only pocket they are allowed to sink balls into. Players may target any ball on the pool table and for every ball they sink in their assigned pocket, they get one point. If a ball falls into any other pocket, the shooter loses a point, the sunken ball is respotted, and the other player gets to shoot the cue from anywhere behind the head string.

The rules of Straight Pool are fairly straight-forward. 15 object balls are set up in a traditional rack and players take turns shooting any ball, regardless of color. Each ball sunk in a pocket counts for one point. Each foul counts as one negative point. Once all balls are sunken, the balls are racked again and play continues until a player reaches 100 points. This game is typically best played by more advanced players.

We hope that by providing this handy guide, our readers will be more willing to mix up the games they play the next time they set up their table. If you’re looking for a new pool table, or accessories for your table or pool room, come check out Extreme Billiards Indy’s inventory. We also offer pool table repair, transportation, consignment, and other services. Call today to see how Extreme Billiards Indy can help you.